Cappie Pondexter came through when it mattered for Fenerbahce as they edged rivals Galatasaray 68-66 in an epic Group A showdown at the Euroleague Women Final Eight in Yekterinburg.

Fenerbahce came from behind to seal the win as they came back from being 39-30 behind at the interval and 66-65 down with 22 seconds left until Pondexter stepped up with a clutch jumper from the elbow plus a foul shot to seal the win.

Pondexter and Angel McCoughtry led the winners with 13 points each. Shavonte Zellous led all scorers in vain for Galatasaray with 21 points.

Sparta&K M.R Vidonje claimed their first win of the Final Eight with a 55-48 success over Kayseri in the other Group A encounter.

Youngsters Nika Baric and Ksenia Tikhonenko were instrumental in the win for Sparta&K. Baric paced them with 16 points, while Tikhonenko added 15 points and 8 rebounds.

Kayseri, who shot terribly from the field, going 32 percent in total, and including 1/14 from three-point land were led by Lara Sanders’ double-double of 14 points and 11 rebounds.

Hosts UMMC Ekaterinburg are into the semi-finals as they eased past Tango Bourges 83-42 in an incredibly one-sided affair in Group B.

The Russian side; led 12-2 early in the first quarter, en route to leading 30-6 after one. There was no way back for Bourges after that.

Nadezhda Orenburg gained their first win of the Final Eight by edging a USK Prague side lacking in numbers following three absentees and Laia Palau fouling out. The Russian side won the match 57-55. 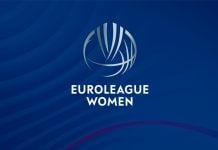