Israel have announced via their Twitter page that center Alex Tyus has been released from the national team.

Despite making the final 12 for Eurobasket, Tyus was never able to shake off a groin injury, arriving in Slovenia 70 percent fit, according to team officials.

Israel are currently 0-2 in Group A following defeats to Great Britain and Ukraine. They next play France, who are currently 1-1. 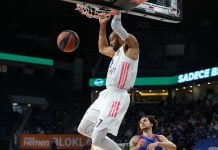