“Our medical staff, our physiotherapists  worked the whole, and when I say the whole night I don’t mean until 1 am but the whole night, to prevent the ankle to be swallen and they did an unbelievable job. […] It’s nothing serious, but I have a philosphy: I never force a player to play, because it’s something I don’t believe is effective, useful and respectful.

As a coach I have already had in mind Plan B, Plan C and the team is ready to give this effort to cover ther absense [I believe for not a long period] of our best player. Not only our best player, but also one of the best players of Eurobasket.

It’s a huge loss, but I never ever want to complain, because complaints bring negative energy.” 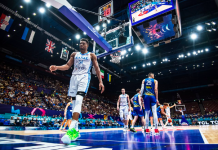