Ahead of Group A’s first game between Great Britain and Israel, GB’s Dan Clark has stated that he feels 100 percent and is ready to go.

This despite Clark not participating in any of Great Britain’s warm-up games and also failing a medical with his new club Zaragoza as the 24-year-old continues to recover from a continuous ankle injury.

The Greenwich-born player seemed a little irritated when asked the question on his fitness and was direct in his answer.

“I feel great, healthy and ready to go,” he said.

“It’s up to coach how many minutes he wants me to play, but I’ll play as many minutes as he wants. I feel 100 percent, basically.”

As a result of Clark’s admittance to the GB team and refusal to listen to the doctors in Zaragoza, who told him to rest up for a minimum of two months, the forward has now been left without a team for the upcoming season.

In a statement made by Zaragoza, it read: “Cai Zaragoza has renounced the signing of the centre Daniel Clark. Club and player have not been able to agree on the measures required for the British player to make a full physical recovery. Zaragoza will now search for a substitute.”

Still, Clark finds himself in the capital city of Slovenia raring to go, regardless of what people think of his injury.

When asked what the mood was like, Clark said: “It’s good. I think we’ve forgotten the friendly games, which are important to forget, but we are just ready to go, get a win and progress on in the tournament.”

Great Britain go into Eurobasket as underdogs to progress into round two, which takes place just down the road from the Hala Tivoli at the Arena Stozice – but the mood – like it was at the beginning of the preparations in London is still positive and the feeling amongst the camp is high.

Great Britain vs Israel tips off at 14:30 (CET), followed by Belgium against Ukraine at 17:45 and France against Germany rounds off the first day at 21:00. 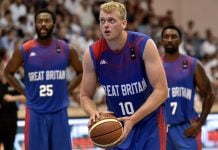