The two Kevin’s have committed to Team USA for the FIBA World Cup of Basketball in 2014.

Reigning NBA regular season MVP and Finals MVP LeBron James though is unlikely to participate. The Miami Heat forward, who steered his side to a second straight title hasn’t represented the United States in non-Olympic competitions since the 2006 world championships in Japan.

USA coach Mike Krzyzewski was touched that Durant flew into Las Vegas to personally tell him that he wanted to play at the FIBA World Cup of Basketball. The former two-time NBA scoring champion is excited to be representing his country again next year.

“I’m excited for this opportunity, to play for Coach K again and to get to play with some of these guys I’ve played with in the past,” said Durant.

“This whole program is first class. And I want to be a part of it. We’ll see, hopefully we get some more names added to the list and some of these great young guys out here as well.”

“Kevin Durant coming out like he has and saying I’m going for it and I want to play, is a tremendous statement,” USA Basketball’s managing director Jerry Colangelo said. “He’s his own man. I understand guys talk and influence one another. But Kevin [Durant] is going to be the face, he’s going to be a leader going forward and I think others are going to respond because of his presence.”

The United States are the current world champions after winning the tournament in Turkey in 2010. 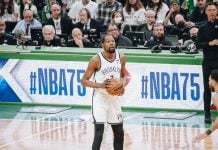