SANTO DOMINGO (FIBA Americas Championship/FIBA Basketball World Cup) – It’s not a surprise, yet the announcement by the Dominican Republic Basketball Federation that Al Horford won’t play for the national team this summer is nevertheless painful.

When one of the best big men in the NBA, a player who has been outstanding for the Dominicans the past few years, decides he’s not going to play at the FIBA Americas Championship, it’s never good news.

The initial reaction from the Dominicans, though, isn’t one of panic.

The general manager of the national team, Eduardo Najri, said: “It’s a significant loss, but many teams will have their absences.

“Yet I am confident that with the squad that we will fight for one of the places for the World Cup.”

In many times over the years, players have closed ranks and almost drawn strength from the absence of a key player.

At the 2006 FIBA World Championship, there were a couple of very good examples.

Turkey  made an unexpected run to the Quarter-Finals despite not having NBA stars Hedo Turkoglu and Mehmet Okur.

Spain also lost Pau Gasol in their Semi-Final win over Argentina yet overcame his loss to beat Greece in the Final.

In 2010, Lithuania were missing key players and competed as a wild card at the FIBA World Championship, but they won a bronze medal.

Najri has no bitterness or disappointment with Horford, either.

Instead, he is grateful that the Atlanta Hawks big man has played as much as he has for the national side.

“I respect his decision to focus on his season and thank him for what he has done the other times he has participated with the team,” he said.

The Dominican Republic will play in Group B of the FIBA Americas Championship with Mexico, Argentina, Venezuela and Paraguay. The top four teams in the tournament will qualify for the FIBA Basketball World Cup in Spain. 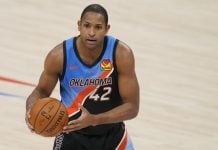 Thunder shut down Al Horford for the season

Malik Monk in a gym working out in Lakers gear

Shaq: “Carmelo Anthony is right, it is championship or bust for...

Richard Jefferson calls out Anthony Davis for being injury prone