Former NBA player and current ESPN analyst Kendrick Perkins is not in favor of a preseason tournament in May by the BIG3 League.

The league plans to host a preseason tournament in May, entitled ”Big Brother”, in which participants will be quarantined in the same house and would then have to play one another in a knockout-style tournament.

“Right now, although we need entertainment, although we are thirsty for sports … but right now I just dont think it’s the time and I’m 100 percent against it.

To me, it’s sending out a bad example of social distancing although you’re going through the proper steps, you still dont want to play with this right now because we’ve all never experienced anything like this,” Perkins told Rachel Nichols of ESPN.

Kendrick Perkins: “How in the hell did Anthony Davis only shoot two shots?” 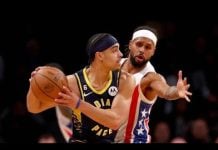 Kendrick Perkins: “The entire league knows the Nets are soft!!!”

Kendrick Perkins implies Kevin Durant is popular, but not powerful