The parents of Dayton star and potential top-5 NBA Draft pick Obi Toppin reveal he wants to play with the Golden State Warriors.

Toppin’s parents made an appearance on the “Raising Fame” podcast hosted by Dell and Sonya Curry.

“Golden State,” Toppin’s mother, Roni, said when asked by Dell and Sonya who Obi wants to play for. “Let’s go to the Bay.”

Toppin’s father, Obadiah, was a well-known street baller in Brooklyn who played for several semi-professional teams.

“I got my few point guards that I always dreamed of playing for, just because they were the truest point guards — like Steph Curry,” Obadiah said. “I think Obi would be great playing with Steph Curry.”

The Warriors had the worst record (15-50) in the NBA at the time of the season’s postponement and are in line for a top pick, maybe even the No. 1 overall pick, depending on what happens in the draft lottery.

Toppin was voted as the AP Player of the Year in college basketball, as he led the Dayton Flyers to a 29-2 record (18-0 in the Atlantic-10 Conference) and a final ranking of No. 3 in the final AP poll.

He officially announced that he will enter the draft on March 25. 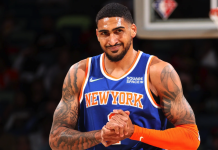