LeBron James has won the Player of the Week Award in the Western Conference, extending his record to 64 times winning the award.

James has a sizable lead in Player of the Week awards, as the late great Kobe Bryant is second all-time with 33 of them.

Last week, James averaged 29.0 points, 7.3 rebounds, 10.3 assists and 1.3 steals per game, leading the Lakers to a 3-0 record with impressive wins against the Philadelphia 76ers, Milwaukee Bucks and Los Angeles Clippers.

This is the third time James has won Player of the Week this season.

Toronto Raptors’ Norman Powell was announced as the Eastern Conference Player of the Week, his first time winning the award in his career. 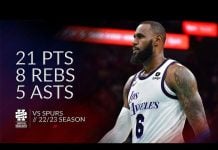