USA’s women have, as expected won gold at the Olympic Games in London as they beat France in a one-sided final 86-50 at the North Greenwich Arena.

Candace Parker led all scorers with 21 points and 11 rebounds as she saved her best performance until the last game. Sue Bird was the only other American player in double digits as the USA sealed their fifth gold medal in five Olympic Games with a 19-0 run in the third quarter which ended France’s brave fight.

Guard Diana Taurasi added: “She had a good game. She came out with energy and more force than in previous games.”

USA though never really looked in danger as they retained their gold medal, this win was also their 41st consecutive victory.

For France, they were just happy to be there, coach Pierre Vincent was happy with his team being in the quarter-finals and he, along with the players never imagined they would be in a gold medal game. Their players were in tears while collecting their silver medal.

“It’s so heavy,” Celine Dumerc joked while being interviewed on the Olympic Broadcasting Network.

France were led by Edwige Lawson-Wade and Sandrine Gruda, who both hit 12 points. On the biggest stage of them all, Dumerc was hounded by Diana Taurasi and Bird all night long as she shot just 2/10 from the field, missing all five of her three-point attempts.

“I just wanted to help the team, really. She [Dumerc] was their weapon. We had to stop her,” Taurasi said.

France hung with USA in the first two quarters, forcing them into rare turnovers and converting them to easy scores. Gruda, who hasn’t had the impact she would have like to at these Olympics scored freely from mid-range as the French were down 37-25 at the half.

They were happy with that.

Then the Americans turned up the heat, and France were trapped in the kitchen.

A 19-0 burst from Team USA, including three-pointers from Bird and Angel McCoughtry gave them a 62-32 lead as France were held scoreless for nearly six minutes. They managed to get back on the score sheet through a solitary Gruda free-throw. The French had to wait another two minutes to get a field goal from Dumerc.

“It’s something that we all kind of know we knew going into this, we wanted to continue to represent our country and the players that have come and won those five in a row,” USA guard Lindsay Whalen said afterwards.

“You want to play well not just for you but for them also and you want to uphold that standard set.”

Earlier in the day, Australia beat Russia 83-74 to claim a respectable bronze medal.

Lauren Jackson led all scorers with 25 points and was of three Australians in double figures. Kristi Harrower hit 21 and Suzy Batkovic added 17. The Opals pulled away in the third quarter with a 10-0 run to lead 48-35. A run that Russia couldn’t recover from.

Becky Hammon, who admitted afterwards that thsi might be her last Olympics with Russia led her side with 19. She didn’t rule out playing at next year’s Eurobasket Women in France though. 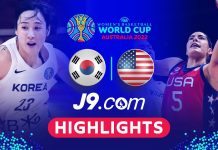 History Made by USA as Women’s Team Score 145 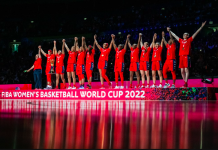