The NBA season is only a week away and this upcoming season proves to be a very intriguing one, after what was arguably the craziest and most unpredictable off-season.

With only 7 days until the season starts, we take a look at notable players, past or present, to wear the number 7 at some point in their career.

Stephen A. Smith: I cannot see Kevin Durant sitting out next season because he wants to play elsewhere 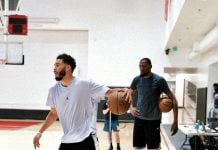