The Basketball Federation of Japan announced that Rui Hachimura will not play in the classification games of the Basketball World Cup.

Per the official statement of Japan Basketball:

“The Wizards and Japan Basketball have been operating under a carefully created load management plan to protect Rui’s health after a long NCAA season, the NBA draft and the NBA summer league.

Rui experienced knee discomfort and general fatigue during the World Cup, which we have jointly monitored with the Wizards.

While everyone had hoped for Rui to finish the World Cup with Team Japan, the Wizards and Japan Basketball believe it is best for Rui to not play the final two games and have a short period of rest before he must start NBA training camp with the Wizards which begins only three weeks from now.

The Wizards and Japan Basketball will continue to work together on Rui’s long term development throughout the NBA season and leading into Rui’s participation in the 2020 Tokyo Olympics.” 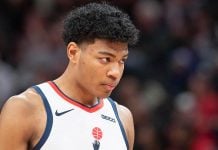 No timetable yet for Hachimura to play, but return will be ‘sooner rather than later’ – Wizards HC Unseld Jr.