Carmelo Anthony would have it easier to find a contract in the NBA if he was doing well in the BIG3 league, says Brian Scalabrine.

He also predicted that Joe Johnson, who is currently playing in the BIG3, would play at least one game in the 2019-2020 NBA season.

“Joe Johnson would not be in the conversation if he didn’t play in the BIG3,” Scalabrine said. “I want Carmelo Anthony to realize that hanging out with his trainer and playing in these bogus picks-up games is not better than playing in the BIG3. 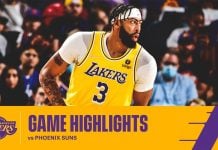 Carmelo Anthony on playing his first game alongside Anthony Davis

LeBron James going through his pregame ritual at Staple Center