Even though Mitteldeutscher BC is fighting to avoid relegation, the club is an example of the rise of German Basketball in terms of the fans’ support and social media coverage.

Over the past few years, the German League has attracted the attention of the European basketball world.

The successful run of Brose Bamberg in the EuroLeague and the FIBA Basketball Champions League, along with the rise of ALBA Berlin and Bayern Munich, has raised the fans’ interest.

Apart from the traditional powerhouses, like the aforementioned ones, there are other clubs that have increased their fan base and social media coverage as well.

Mitteldeutscher BC is such an example. The team has competed in the top tier of the German Basketball since the 1999/2000 season.

In 2004, they claimed the FIBA Europe Cup title, but later in the season the team went bankrupt and was relegated to the third division.

They returned to the BBL in 2009, but were relegated twice in 2011 and 2016, respectively. Last season, they finished 15th and this year the team is again fighting to avoid relegation.

With four games to go, Mitteldeutscher BC currently is 15th in the standings (8-22 record), just one win above the relegation zone. The squad has been in a decent form lately, having won three of their last five games.

More importantly, their triumph over Bayreuth at home (108-90) on Sunday (28/04) boosted their chances to remain in the league.

Even though it is not considered a top club yet (like Bayern Munich or ALBA Berlin), Mitteldeutscher BC has an increased fan base, while the club is also very active on social media.

Based on the stats, the club has rapidly increased its fan base and the fans show their interest and support to the team by following the club on all major social media networks (Facebook – 11.084, Twitter – 5.283, Instagram – 3.408).

Concurrently, the squad has an average attendance of 2.700 fans, which is an impressive number, given that their home-court, the Stadthalle Weibensfels, has a capacity of 3.000 people. Furthermore, the team is also playing at the Arena Leipzig (capacity of 7.000 people).

Thanks to its participation in the top-tier German League as well as the rise of German Basketball, Mitteldeutscher BC has been collaborating with a lot of sponsors.

One of their most important partners, in terms of the relationship with fans and social media presence, is 2 LIONS media consultant.

2 LIONS is an advertising and marketing company, which is based in Leipzig, and is also offering sports marketing and social media management.

Currently, it is the official marketing sponsor of Mitteldeutscher BC and, among other duties, is in charge of the video marketing and social media marketing strategy of the club, which includes its active participation in all major social media networks (Facebook, Twitter, Instagram, Linkedin).

In an effort to inspire families and attract more fans, Mitteldeutscher BC and 2 LIONS recently collaborated to create the first cross-sports commercial, named “Basketball meets handball: An emotional sports history in Central Germany”.

The project was very successful, based on the fans’ response in the official premiere and the number of views on social media (over 60.000 on Facebook). That said, it is very likely that the German team and 2 LIONS will work on creating similar projects in the future.

Overall, and along with its effort to avoid relegation and remain in the BBL, Mitteldeutscher BC is doing its best to attract more supporters. Its increasing fan base and social media presence shows that the club works towards becoming one of the most popular teams in Germany. 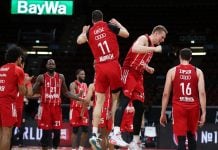 Johan Roijakkers on Talkbasket: “Teams won’t be the same anymore since some players already returned home and won’t come back”