Every school in each region is assigned a specific NBA team to represent throughout the season. This year will see the Jr. NBA expand to 13 leagues nationwide, which will take place in London, Birmingham, Manchester, East of England, East Midlands, Yorkshire and the North West. The 13 leagues will be expanded to 16 by 2021 with three girls-only leagues added to the current leagues. The league expansion is targeted to reach more than 22,000 boys and girls ages 11-13 in seven cities and regions across England this year.

This year’s Jr. NBA BE Leagues will also be open to 13-year-olds, as part of the Year 8 League expansion, which will give more children the opportunity to qualify for the Jr. NBA World Championship which was held in Orlando last year. The first-of-its kind global youth basketball tournament took place from Aug. 7-12 and featured 32 of the top 13- and 14-year-old boys and girls teams from around the world. 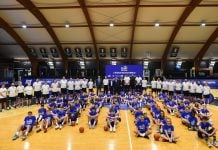 Shaquille O’Neal on his beef with David Robinson: “It was all made up”