Partizan NIS beat Dolomiti Energia Trento at home in the sixth round of the 7DAYS EuroCup. Final score was 76-71, so the Serbian side marked its second win and left Trento on the 6th place of Group C.

Andrea Trinchieri’s new team started very well. The home team left their opponents with only seven points in the first quarter (22-7). Nikola Jovanovic struck back and Partizan was up by only four points after the first half (36-32).

Partizan took initiative again in the second half, but never managed to break Trento’s resistance. The guests came close (72-69) with only 40 seconds left, but Vanja Marinkovic showed no mercy from the free throw line.

Jock Landale led the home team with 18 points. Marcus Paige added 16 points and 6 assists, while Nikola Jovanovic was better than the other Trento players, with 20 points and 6 rebounds. 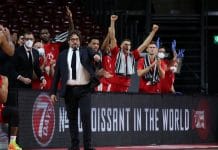