ASVEL Villeurbanne have agreed to a two-year deal with Miro Bilan, as the club announced today. 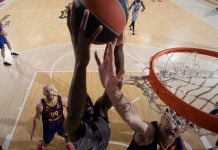