Coach Obradovic, who is seeking for his 10th Euroleague title, said his team lost key players during the offseason, but the newcomers stood up and showed character and that was the key for his squad in their effort to reach another Final Four.

The legendary coach mentioned Euroleague’s Final Four format is excellent, as all media and fans have the opportunity to be here, with coach Laso adding that this has been an amazing weekend in the city of basketball, where the best teams in Europe compete for the title.

Coach Obradovic also explained that Luka Doncic is a very smart person and player that has done so much in his career so far and has been lucky enough to play under coach Laso.

Kostas Sloukas said his target is not to be the leader, but to stick to the plan of the coach and win the title, while he praised Luigi Datome for his character and overall performance in the semi-final.

The Greek guard added that Real Madrid have the best roster in the Euroleague and they should focus not just on Doncic, but on the whole team.

Coach Laso didn’t have much to say about the clash with Fenerbahce, but praised coach Obradovic and pointed out that he was proud of his players and happy to be in the Final.

The experienced coach added the atmosphere will not affect his players, who are used to it, because “in the end it’s 5-on-5 on the floor”. He also stated that Luka Doncic keeps growing as a player and is more experienced now.

For his part, Rudy Fernandez said his team had a tough season, due to the injuries they suffered, but they learnt from this, they stepped up and now want to win their second title in four years. 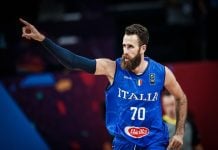