LiAngelo Ball has reportedly declared himself available for the 2018 NBA Draft.

Ball, a 6-foot-5 guard/forward, has established himself as a pro player this season in Lithuania with Vytautas after originally being stated as the “weaker” of the three Ball brothers.

He’s averaging a league-leading 15.7 points and 2.9 rebounds and is shooting 45 percent from three-point range but most importantly, he’s showing himself to be one of the premier players in the LKL. 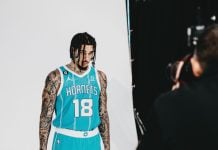