Maccabi FOX Tel Aviv has released one of its top players, Sonny Weems, the club announced Wednesday. Weems, who joined Maccabi on a two-season deal over the summer, led Maccabi in assists (3.4 apg.) and was second in scoring (11.6 ppg.) and steals (0.95 spg.) over 19 Turkish Airlines EuroLeague games this season.

Weems was expected to be among the team leaders this season, but Maccabi has struggled to one of its worst-ever EuroLeague seasons and is currently in 14th place with a 7-13 record.

Maccabi was the third club in five EuroLeague seasons for Weems, who previously suited up for Zalgiris Kaunas and CSKA Moscow. He was named to the 2013-14 All-EuroLeague First Team with CSKA, with whom he reached three consecutive EuroLeague Final Fours from 2013 through 2015.

Maccabi’s full statement is as follows:

“Maccabi Tel Aviv Basketball Club has released Sonny Weems from the team. Due to the irregular chain of events leading to this decision, delicate and private matters, the official release was delayed till today.” 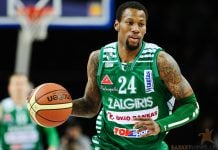