Russian Basketball Federation president Andrei Kirilenko has suspended Nizhny Novgorod, Khimki, Lokomotiv Kuban and Zenit St. Petersburg from competing in the domestic league due to their involvement in next season’s Eurocup.

Kirilenko had previously warned Russian sides entering the Eurocup would be suspended so that they could avoid any suspension of the national side from FIBA.

“Khimki, Lokomotiv, Zenit and Nizhny Novgorod will be disqualified from all competitions held under Russian Basketball Federation,” Kirilenko said in a statement. “All transfers from and to these clubs will be prohibited. It’s a sad fact, but we will apply those measures.”

But the four aforementioned sides have decided to play in next season’s second tier competition, which effectively puts FIBA’s flagship “Basketball Champions League” into the third tier category alongside their FIBA Europe Cup.

But interestingly, the four teams, as well as CSKA Moscow, who play in the Euroleague compete in the VTB League, which is not governed by the RBF, so many have asked if the ban will have a major effect on the four teams that have shut out, providing that they keep the majority of their roster from last season.

Lokomotiv Kuban and Khimki competed in last season’s Euroleague with the former reaching the Final Four in Berlin. 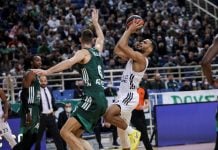