Kuric starred in the club’s historic run to the Eurocup Finals last season, his first in Gran Canaria. He has started this season averaging 14.7 points as the team won its first three Eurocup games.

The club said that Kuric complained of migraine headaches before sitting out a Spanish League road game against Laboral Kutxa Vitoria Gasteiz over the weekend. On the way to its Eurocup game in Berlin on Wednesday, the team stopped in Barcelona, where Kuric was hospitalized, tested and diagnosed.

Previous to playing with Gran Canaria, Kuric started his pro career for Estudiantes of Spain after having spent four season with University of Louisville. Euroleague Basketball extends its best wishes to Kyle Kuric for a speedy recovery. 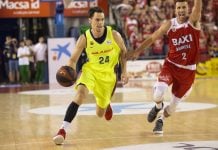