Apparently, the injury of Karl-Anthony Towns has been much more serious than what was initially viewed by many.

Towns revealed that he sustained a Grade 3 calf strain, a much more severe one than the Grade 2 classification that was reported by the Minnesota Timberwolves last November.

“It was never a Grade 2 [strain], it was never going to be a Grade 2, unfortunately,” Towns said on his recent Twitch live stream, per Chris Hine of Minneapolis-Star Tribune. “I prayed to God almighty that it was a Grade 2, but I knew it wasn’t. It was a Grade 3.”

Towns has been out of the Timberwolves’ lineup since Nov. 28, wherein it was reported that he’ll be re-evaluated for four to six weeks.

Now, with almost two months since the injury, it remains yet to be known when the All-Star big man will make his return. The recovery timeframe that was released gave Towns something to be frustrated of on the franchise, noting that the T-Wolves fans were given a “false hope” upon their tired anticipation.

“I wish it was four to six weeks. I knew then it wasn’t going to be four to six,” Towns continued. “The team was trying to say four to six. There was no way with the injury I sustained, it’s a very significant injury. I don’t know if they were trying to give false hope to the fans or what the case may be.”

Before going down, Towns is averaging 20.8 points, 8.2 points, and 5.3 assists while shooting over 50 percent from the field. He has missed the team’s 26 out of 47 games this year.

Amid his lengthy absence, Minnesota is gradually rising towards the Western Conference ladder but still fighting inconsistency with a 23-24 record. 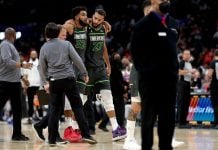