The Suns are reportedly close to finally making trading Jae Crowder. The 32-year-old forward has not suited up for the team this season after making a trade request during the offseason.

According to Eric Pincus of Bleacher Report, the list of potential suitor include the Bucks, Hawks and Warriors. It is thought that a multi-team trade is likely to be needed in order to make the deal happen. 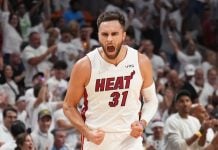