Contrary to the murmurs and heckling he received, returnee Dennis Schroder denies any report suggesting that he was offered by the Lakers a four-year, $84 million extension back in the 2020-21 season.

As such, it was very well documented since then that Schroder, indeed, fumbled the said bag.

Various sources have confirmed that Schroeder was offered the said amount and extension by the Lakers during that time. But the camp of the German guard has insisted that they’ll wait to discuss a probable extended partnership as offseason hits.

Eventually, the hopes of the Lakers faded to dust, and Schroder’s hopes of inking a much lucrative deal has gone, too. Failing to secure a bigger money bag, he inked a one-year, $5.9 million deal with the Boston Celtics and ended up spending the 2nd half of 2021-22 season with the rebuilding Houston Rockets.

Now hammered on a one-year, $2.64 million contract with the Lakers, Schroder is looking to raise his market value and prove himself in his second tenure repping up a Purple and Gold.

“The whole situation with the Lakers, that was a little weird,” he said. “That’s the reason why said, ‘I’ll even play for free here,’ just to make it right, just to put everybody in the right direction.

“Of course it would be great to sign a big deal and a longer-term deal, and that’s my goal still. But the end of the day, we are here now and I’m going to do everything I can right now to just help my teammates win ballgames.” 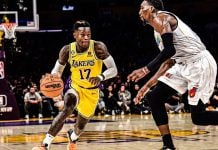