The Golden State Warriors have waived big man Trevion Williams, the team’s PR department announced (via Twitter). Williams, 22, went undrafted in June’s draft. He had a productive college career with the Purdue Boilermakers, earning a couple of All-Big Ten honors the past two seasons while averaging a combined 13.5 PPG, 8.2 RPG, and 2.7 APG. 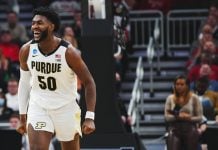