According to Shams Charania of The Athletic and Stadium, free agent G/F Sviatoslav Mykhailiuk has agreed to a partially guaranteed one-year deal with the New York Knicks. 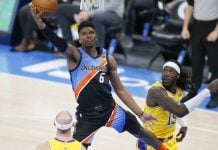