“We have been working for weeks. I believe he stays here, but we haven’t signed anything. It just depends on him: he has a family, three childs, he is a Georgian man that leaves in Spain but loves Bologna and values this club. 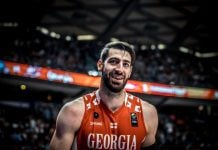