As the league’s 2022-2023 season Christmas Day slate was officially unveiled, Trae Young seemed unamused and gave a subtle jab recently at the non-inclusion of the Atlanta Hawks.

The Hawks had a splash this offseason upon the addition of All-star guard Dejounte Murray from the San Antonio Spurs. The move instantly makes them a must-watch club in the upcoming season.

But in hindsight, it could have been better if they were added on the schedule. Other than the Hawks, the Miami Heat was also snubbed for a holiday hoops treat. The same applies on the Minnesota Timberwolves with the newly-acquired Rudy Gobert, as well as the loaded Los Angeles Clippers.

As such, the upcoming new season will serve its own purpose of thrilling the fans with the new amount of parity and competitiveness amongst the contending teams. Trae Young on his combo with Dejounte Murray: ‘Kind of scary, people don’t understand how dynamic we can be’ 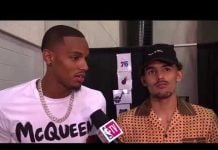