According to Shams Charania of The Athletic and Stadium, the Chicago Bulls star DeMar DeRozan is signing a new four-year deal with Nike that keeps him as the featured face of Kobe Bryant’s iconic line.

DeMar DeRozan on how the Bulls take a leap forward

DeMar DeRozan reacts to his abysmal shooting in Game 1 loss vs. Bucks 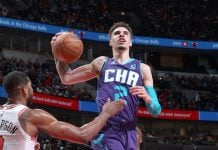