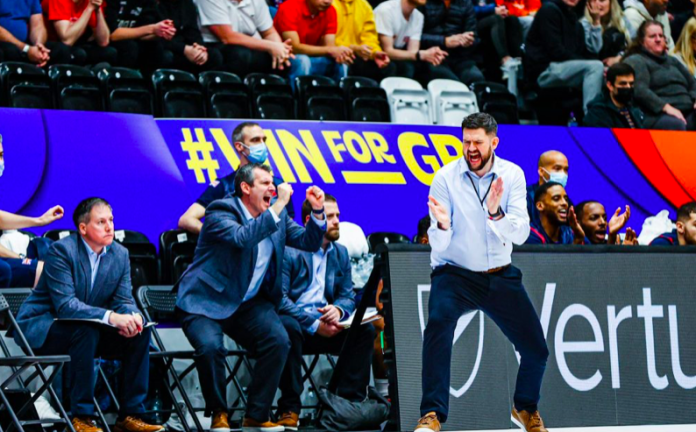 The role will be different for Great Britain’s Marc Steutel in the latest FIBA World Cup window, but he insists nothing has changed.

For three years the interim head coach, Steutel will revert back to his original role as assistant with Nate Reinking returning to lead GB against Greece on 30 June and Turkey on 3 July.

And Great Britain head into the latest round of fixtures in a rich vein of form having won 12 of their last 15 games with Steutel a large inspiration for that run.

Behind the scenes, however, Cleveland Cavaliers assistant, Reinking has been watching and analysing, with frequent phone calls with Steutel before and after each game, carefully detailing and scrutinising.

“It might feel like it will be different with Nate here, but he’s been with us throughout, just not in person,” Steutel said.

“For us, it has been the same for every window regardless of what the coaching role is, whether it’s six or eight weeks, you come together and start your analysis, check the player’s availability and put together a plan of action.

“We have been lucky to have such a good support staff of analysts, medical guys and team manager throughout our spell and we have come together as one with everyone contributing.

“I’ve been lucky to have worked with Nate since 2019 and got the chance to work with him in different windows even when he wasn’t here.

“But what has been over looked was just how great Nate was in our recent windows, going back and forth, looking at things that worked well, what needed improving and Nate looked at that from the outside and a lot of our thoughts would align.”

And with Reinking at the helm, albeit via phone, Steutel alongside assistant coaches Andreas Kapoulas and Jamie Smith have steered GB to a 1-1 record in a tough Group B alongside Greece and Turkey.

GB have also had an unexpected break with the suspension of Belarus due to their involvement in Russia’s invasion of Ukraine, meaning all three teams in the group have advanced to the second round of qualifiers.

For Reinking though, he returns to the fold ahead of arguably GB’s toughest window. Despite their form and overall confidence within the squad, they will be underdogs.

However, that title has served the team rather well recently.

“No doubt we’re seen as the underdogs but you’ve seen it from these guys time and time again in these situations that they’ve delivered hugely when the odds are against them and there’s no reason they can’t do the same this time,” Reinking said.

“They have the belief in themselves, in their team, in their staff and what they can do and that belief just radiates throughout the whole programme.

“Going to Greece and winning for any country is a tall order, and to beat Turkey – especially with the roster they’ve announced – is no easier.

“The chemistry and togetherness of these guys though is incredible and we’ve proven in the past that challenges like these bring the best out of them, so we’re excited for the window and eager to see what comes of it.”