All eyes are now directed on superstar Giannis Antetokounmpo in the international stage, as the two-time MVP is being assumed to play under the proud colors of Greece in the 2022 EuroBasket Cup.

In an interview with Greek public media ERT, Greece national basketball team general manager Nikos Zisis said that they are expecting Giannis to suit up and lead them to a great finish in the said tournament.

“Honestly, I wanted Giannis to succeed in the NBA Playoffs. We were convinced from our trip to Milwaukee that he really wanted to play for the national team in the summer. His playing status wouldn’t be affected by extending the campaign further in the postseason. Even if he was crowned champion, he would gladly play for us. Missing [Khris] Middleton in a best-of-seven series was a huge blow. Giannis was amazing, gave it his all, and that was apparent.”

Giannis is fresh from a failed back-to-back title campaign with the Milwaukee Bucks, as they bowed down to the Boston Celtics in a gruesome seven-game series of their East Semis encounter. Despite the painful outcome, the Greek Freak had a legendary second round run without co-star Khris Middleton against the league’s best defensive team in Cs, averaging an astounding 33.9 markers, 14.7 boards, and 7.1 assists.

As such with those averages, he became the first player in league history to record 200 points, 100 rebounds and 50 assists in a single series.

“We are waiting for him to rest up and afterward arrange another meeting to confirm him being available [for EuroBasket].”

After winning his first NBA championship with Milwaukee, Giannis already hinted his intentions to play in the EuroBasket this year via Twitter. This playing opportunity in the national horizon is set to become his fourth since leading Greece to the 2019 FIBA World Cup in China.

Greece will join the Group C of 2022 EuroBasket in Milan, facing Croatia, Italy, Great Britain, Ukraine, and Estonia between Sept. 2-8. The top four nations in the elimination round will then fly to Germany for the continuation of the competition. 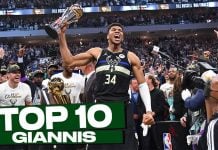