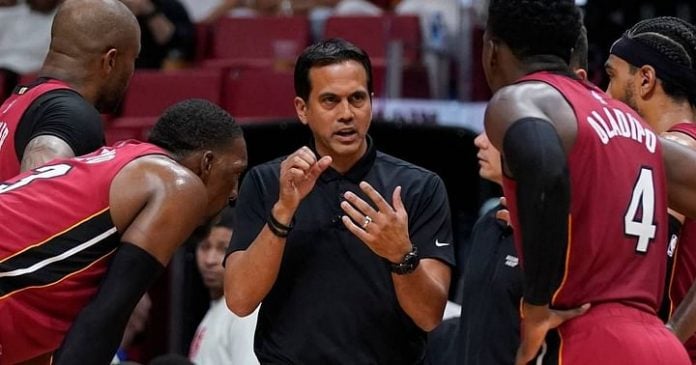 The Miami Heat crumbled in Game 4 through a miserable fashion and Erik Spoelstra can’t sympathize about the embarrassing performance of his team.

Shortly after they fell from a 102-82 hole against the Boston Celtics, the talented coach stressed out that Miami has no valid excuses to present and they only played bad basketball all night long.

“We’re not making any excuses, they outplayed us tonight for sure,” Spoelstra told reporters in post-game, via Brady Hawk of Five Reasons Sports. “Outside of these crazy runs, you have two really competitive teams.”

“It can get away from either team at any time, and that’s what happened tonight.”

Spoelstra also denied the idea of Butler’s knee issues being a key factor in the Heat’s 20-point meltdown. On Saturday Game 3, the star swingman was announced out prematurely due to the said injury.

“No, we just got outplayed tonight … This is the playoffs. Extreme highs, extreme lows … What you’re looking at is a great series. It’s 2-2.”

The Heat played perhaps their worst playoff basketball so far this postseason. The starting five of Butler, Kyle Lowry, Max Struss, P. J. Tucker, and Bam Adebayo only managed to combine a humiliating 18 total points throughout 48 minutes — the lowest by any five-man starters since it was tracked up in 1970-1971 campaign.

Despite the full negativity that they had on Monday, Spoelstra presented a little glimpse of optimism that they’ll turn things around heading home to South Beach for the continuation of the series.

“We’ve proven that we can do it. The margin for error for either team, whatever they’ve done to us, we can do to them.”

This year’s Eastern Conference Finals is now a best-of-three war, as both the Heat and the Celtics will return to the FTX Arena on Wednesday for a crucial Game 5.