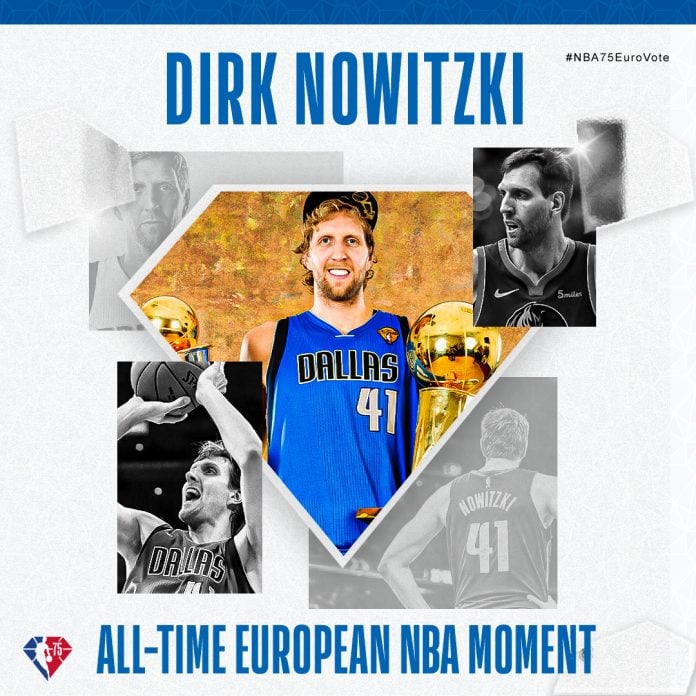 Germany’s Dirk Nowitzki winning an NBA championship after leading the Dallas Mavericks back from a 2-1 game deficit in the 2011 NBA Finals was voted the “All-Time European Moment” by European fans and a blue-ribbon panel of European media, influencers and celebrities as part of the NBA 75 Euro Vote. Pau Gasol’s 2008-2010 run with Los Angeles Lakers finished second, and Giannis Antetokounmpo’s 50-point performance in Game 6 of the 2021 NBA Finals finished third.

NBA 75 Euro Vote pays tribute to current and former European players who have inspired generations of basketball fans across the continent and celebrates NBA fandom in Europe. The last voting category will be the All-Time NBA European First and Second Teams and will run from March 28. In the first two open voting categories, the 1995-98 Chicago Bulls were named the All-Time NBA Dynasty, while the 1998-1999 Toronto Raptors jersey won the All-Time NBA Jersey. For all NBA 75 Euro Vote categories, the fan vote accounts for 50 percent of the final result while the panel makes up the other 50 percent.

Follow the conversation on social media using the hashtag #NBA75Eurovote.