An exciting summer is in store for basketball fans, as EuroBasket 2022 is staged across four host nations. The competition gets underway on September 1st, before the Final is played out on September 18th. A number of the best European players will be in action throughout the competition. That makes it an unmissable event during the NBA off-season for those with a passion for the sport. Below, you can find out everything you need to know about the huge event taking place this year.

Which Teams Have Qualified?

This year’s EuroBasket will be the 41st installment of the event and it promises to be one of the most entertaining. The first game of the competition gets underway on September 1st and teams will compete through a knockout bracket, before just two remain. The final is set for September 18th. It will be a welcome sight to have the competition this year, as last year’s event was delayed due to the rescheduled Olympic Games in Japan.

However, this year’s competition promises to bring together fans from all over Europe. It will be held in five host cities in four different countries. The Czech Republic, Italy, Georgia, and Germany will all share hosting responsibilities. The EuroBasket 2022 Final will be held at the Mercedes-Benz Arena in Berlin.

Which Teams Have Qualified?

The competition is one of the most grueling events in Europe for national teams. A total of 24 national teams have qualified to compete in the competition this year. A good number of those among the competition’s past winners in years gone by will be attempting to retake former glory. The nations involved have already been drawn into their groups, with the top four from each making it through to the next round.

Group A will see the heavy favorites to win the competition look to secure top spot. Spain will be heavily expected to win their group, despite competition likely to come from Russia, Turkey, and host nation Georgia. Belgium and Bulgaria round off the teams involved in Group A.

France will also be looking to go far in the competition this year. It promises to be an interesting battle and the local sports betting sites are already buzzing with possibilities. France’s Group B, will also include Germany, Lithuania, and Slovenia. The Group is rounded off by Hungary and Bosnia and Herzegovina, who will both be looking for a Cinderella story to pass through to the next round.

Greece will be the clear favorites to progress from Group C. The sixth-seeds are joined in their respective group by Italy, Croatia, Ukraine, Estonia, and Great Britain. The battle for the three other qualifying spots will make for captivating viewing.

Serbia and the Czech Republic are the two standout sides in Group D. Both should easily have enough quality to take one of the four qualifying spots. Meanwhile, an interesting competition between Poland, Finland, Israel, and the Netherlands will be battling for the remaining two spots in the very tight-looking group.

EuroBasket has been a regular event on the basketball calendar in Europe since 1935. The unpredictability of the event that makes it one of the most interesting basketball tournaments in the world. It also gives European fans a rare opportunity to see some of the biggest stars representing their nation.

What Happened At EuroBasket 2017

The last EuroBasket competition was held back in 2017. It was a famous event for Slovenia, as they won the title for the very first time in their history. They managed to overcome Serbia in the final, with San Antonio Spurs star Goran Dragic winning the MVP award. Dragic scored a high of 35 points in the 93-85 victory over Serbia.

The top scorer in the competition was Alexey Shved for Russia, as he averaged 24.3 points per game. However, Russia could finish in only fourth place, as they lost in the match for third against Spain. 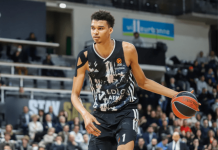