It’s safe to say that the Phoenix Suns have not been on the greatest of runs as of late. Coach Jeff Hornacek has even publically come out and admitted it.

Phoenix Suns coach Jeff Hornacek has accused his side of being too soft in games as he vented his frustration following their latest defeat to the Miami Heat.

“We have to find out who on this team is going to be tough,” Suns coach Jeff Hornacek said. “In terms of going after balls, we are soft going after everything. Teams just take the ball out of our hands. Maybe they grab your arm but you have to be tougher than that. I don’t know what it is but, when teams get physical, we look like a high school team. We have to get tougher and we have to find tougher guys who are going to battle. I get tired of watching us not go after balls. There is nothing worse to me than being soft and not going after a ball.

That same game saw Miami’s Hassan Whiteside get into it with Phoenix’s Alex Len.

Following a dunk from Whiteside on Len, with the latter committing the foul, The Heat forward’s elbow landed on Len which the Ukrainian took offence to and an ongoing scuffle ensued.

“I realize a lot more teams are being really physical with me,”Whiteside said. “And I’m down for it. That’s what I lift weights for. It was the fourth or fifth time I dunked on him and I could tell he was frustrated.”

Much as the Whiteside regretted getting tossed for the skirmish, the resurgent big man used it as an opportunity to send a warning to any opponents coming in to AmericanAirlines Arena over the next six weeks.

“I shouldn’t have retaliated, because it really hurt my team,” Whiteside said. But every day is a learning day for me. You’re not going to come into Miami and bully us.”

Shannon Sharpe: “Lowry would help, but the Lakers need a big like Drummond or Whiteside”

Lakers’ Anthony Davis to miss at least next three weeks 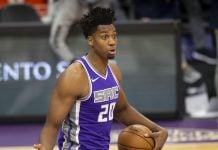 Hassan Whiteside is a potential target for Lakers