Steph Curry is one of the best, if not the best, three-point shooter of all time. Recently, Golden State Warriors superstar overtook Ray Allen as the NBA’s three-point leader.

His ability to make shots from beyond the arc so easily is having a tremendous effect on how basketball is played in the NBA as well as the new generation of players. According to Warriors head coach Steve Kerr, kids are now taking three-pointers because of Curry.

“About seven-straight possessions, these 10-year-old kids launched 3-pointers, and I turned to Steph and I said, ‘Steph, this is all your fault,'” Kerr said during the announcement of him becoming the head coach of Team USA via 95.7 The Game. 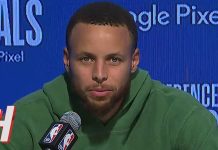 After Steve Kerr’s speech in 2020, the district voted to remove Police from Oakland Schools