Khris Middleton has made huge strides since he entered the league and has become a perennial All-Star, coming all the way from the G League.

During the game between the Bucks and the Thunder, the All-Star became the all-time leader in three-pointers in franchise history.

Middleton surpassed Ray Allen, after hitting the 1,052nd three of his NBA career in Milwaukee. Middleton, who was a vital part of the Bucks’ title run, returned to action two days ago, helping Milwaukee get a win over the Lakers.

Ideally, the three came after a Giannis Antetokounmpo assist during the first quarter of Saturday’s contest. The Bucks are hoping to add to their winning tally going forward, after a 7-8 start at the beginning of the season. 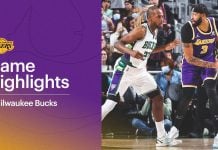 James Worthy on Lakers losing to Bucks: “It was a good game by both teams”

Michael Porter Jr. might miss rest of the season with back...