The NBA is a huge entertainment industry with its heroes, legends, and fanatics; a pop culture phenomenon similar to the Marvel franchises. Basketball in America is inseparable from movies, fashion, music, entertainment, where 22Bet Ethiopia is the flagship company, the digital revolution, and is itself like a fascinating series (sometimes literally: the documentary The Last Dance, a film compiled from NBA archive footage of great player Michael Jordan and his Chicago Bulls team, was an absolute hit last year and collected every possible award). The NBA has long been more than just a sport.

The NBA Is a Movie

Basketball itself is very cinematic. Characters are colorful, the action is big, and games are action-packed-the drama of an intense rivalry can change at any moment into the comedy of an absurd slip-up. The players are potential actors: their faces are not hidden by helmets, and they are quite charismatic.

The movie industry and the NBA have always gone hand in hand. Back in the 1960s, when the Lakers moved to Los Angeles, all of Hollywood came to the stands. Jack Nicholson, sitting in the front row wearing the same black sunglasses, became as much a part of Laker’s success story as legendary players like Magic Johnson, Shaquille O’Neal, and Kobe Bryant. There, too, but in LA Clippers colors, you could often see Billy Kristal, for “My Giant,” taking on the title role of the tallest player in league history, Gheorghe Muresan (2.31 cm). On the East Coast, Woody Allen and Spike Lee actively cheered on the Knicks – with Lee playing the role of the fan himself in his first hit movie, and so successfully that the character became part of a Nike and Michael Jordan advertising campaign. In 1997, Lee released “His Game,” arguably the best movie about basketball.

Now the basketball comedy genre is experiencing a renaissance – LeBron chasing Jordan’s ghost is releasing a second “Space Jam,” his former teammate Kyrie Irving turned a series of Pepsi commercials into a full-length “Uncle Drew” movie. The crowning glory of the Hollywood-NBA collaboration is the Oscar that Kobe Bryant won for his animated short film, “Dear Basketball”.

The NBA Is a Music

Hip-hop is a subculture art; basketball is a subculture sport. They were bound to cross paths. There have always been singing basketball players: in the 1960s, Wilt Chamberlain recorded a bubblegum-pop single. Another great center, Bill Walton, strayed into counterculture – he played drums several times at concerts by the legendary psychedelic rock band the Grateful Dead.

Yet basketball is inextricably linked to music: the names of Knicks and other NBA players can be heard on almost every Beastie Boys record, the Red Hot Chili Peppers used to play every Lakers game, and grunge kings Pearl Jam were originally called “Mookie Blaylock” after the famous guard of the 1990s. The music, specially written for the 2003 NBA Live game, became the first platinum soundtrack in computer game history.

Where there’s basketball, there’s Ice Cube, Lil Wayne, Jay-Z, 2 Chainz, Migos, Snoop Dogg, and hundreds of lower-ranked rappers. Drake is the official ambassador of the Toronto Raptors, Jay-Z once co-owned the Brooklyn Nets, and Justin Timberlake is the Memphis Grizzlies.

The NBA Is a Fashion

Brands and fashion houses long ago realized that tall athletes had an advantage: they fit more clothes. As early as the 1970s basketball players were style icons: Wilt Chamberlain and his silk shirts, the disco style and oversized hairstyle of Afro “Doctor” Julius Irving, Knicks point guard Walt Frazier and his chic suits, hats, caps, and overall image of a stylish pimp.

There are times when people are not even aware of the basketball roots of the clothes they wear. For example, a few generations of hipsters and fans of good shoes have been wearing sneakers signed by a basketball player – Chuck Taylor, whose signature adorns the star on every model of Converse All-Stars, invented these shoes a century ago just for the game of basketball, based on his sports experience, and for the first half-century, this model really dominated the courts and only then made its way into the everyday closet. The tradition continued with Puma’s iconic “Clydes,” the first name line of sneakers ever created for Walt “Clyde” Frazier. Popular with hip-hop and skate-punk fans, they were perfect for break dancing or skateboarding.

What’s in the Future?

Basketball is a young sport: it’s just over a hundred years old. Maybe that’s why the NBA has never been afraid of the future. The Internet, cryptocurrencies – who knows, maybe one day a basketball player will be president of the United States, a basketball NFT token will pay for the purchase of a house, and we will see the first basketball game on the surface of the moon. It sounds fantastic, but it would be strange to take for granted, given the history of the NBA. 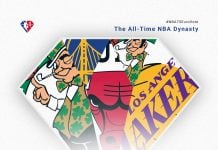 DeMar DeRozan says he has never played with a player like...