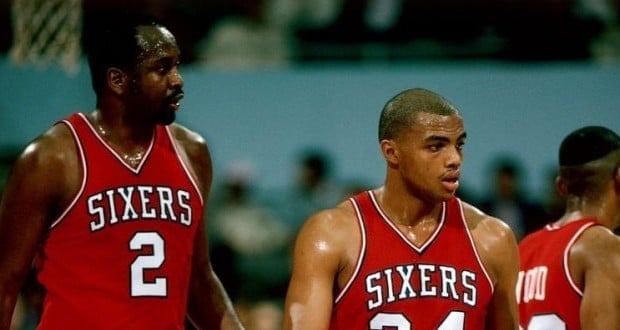 Charles Barkley is one of the most iconic players ever. With an imposing bulky appearance, combined by an overwhelming athleticism, no one dared to stand against him in coast-to-coast scenarios. Jacked up at 6’4″ and being undersized for both forward positions, he still transformed his way as an all-time figure — remarkable for being a bulldozing, explosive beast. A jack-of-all-trades on the two-way end who can score tremendously, rebound tenaciously, and defend everyone, his muscular body and unreal physical traits gave him 11 All-star appearances, 11 All-NBA team selections, and the prestigious 1993 NBA MVP — overpowering the Phoenix Suns en route to the NBA Finals.

But at the very beginning of his professional career, it was harsh — he struggled as a stout, young athlete.

It may be good to say that Chuck’s hard work made it through all, but it would not be fair for him to discredit a former teammate and a late icon who truly guided him out of the rough start.

And that is Moses Malone.

Joining Chris Long in Green Light podcast way back in the month of June this year, Barkley narrated a story wherein he was curious about not getting a game time action as a rookie.

“So I go [drafted] to the Sixers and I’m not getting a play — and right away I am struggling.”

And then he approached Moses for an answer — which turned out to be a career-saving move for his part.

The ‘Round Mound of Rebound’ further claimed that being drafted by the Philadelphia 76ers is the best thing that happened to him, due to the disciplinary guidance he received from Big Mo and even financial tips from the legendary Dr. J himself, Julius Erving.

“Getting drafted by the Sixers was the greatest thing for me because Moses was great to me and made me lose all that weight; Dr. J talked to me about saving my money.”

The rest was history for Chuck. After achieving a conditioned body and an organized mindset from the help of his seniors in Philly, he stormed the league and shifted into a fearful cager in the late 80s and whole 90s.

Moses Malone was indeed a phenomenal one — possibly the most underrated player in league history who managed to claim triple MVP honors, multiple All-star selections, and tons of All-NBA honors. A workhorse of his own and a rebounding maestro, he led the city of Philadelphia to a 1983 title via sweep against Kareem Abdul-Jabbar, Magic Johnson and the Showtime Los Angeles Lakers in the NBA Finals.

Barkley currently works as a studio analyst for TNT. He was included along with Malone in the NBA’s top 75 list.

Wouldn’t it be wonderful if there is someone who will guide Zion Williamson, too?

Pelicans in free fall – Can the return of Zion Williamson bring them back to the winning track?

Trevor Ariza ‘ways away’ from season debut with the Lakers

Miami Heat would reportedly have interest in John Wall if he...