Precious Achiuwa: All around game is at a high level right now. Also came up with 3 steals vs. Boston. 13 points, 13 rebounds

Svi Mykhailiuk: Scoring the ball with energy early on during preseason. Averaged 10.3 PPG for OKC after getting traded back in March. 12 points, 4 rebounds

David Johnson: Second round pick out of Louisville. Had a nice scoring run in short minutes on Saturday. 5 points, 2-2 FG

Al Horford: Horford looks in great shape. Knocked down all 4 of his three point attempts vs. Toronto. 16 points, 2 blocks

Romeo Langford: Shooting the ball efficiently off the bench. Definitely ready to increase his role for Boston. 13 points, 3-4 3-PT

Josh Richardson: Now with the Celtics after one season in Dallas. Also collected 2 steals on Saturday. 7 points, 6 rebounds

Juancho Hernangomez: Shooting and rebounding can make an impact for the Celtics. Just turned 26 on September 28th. 7 points, 2-3 FG

Obi Toppin: Toppin has some pretty impressive strength and athleticism. Should be interesting to see what his role will be in his sophomore year. 13 points, 8 rebounds

Taj Gibson: Competes harder than most players. Energy has helped him stay in the NBA for a very long time. 8 points, 6 rebounds

Jericho Sims: The rookie big man has proven he can certainly play in this league. Also collected 3 steals vs. Washington. 7 points, 13 rebounds

Montrezl Harrell: Fitting in nicely for the Wizards off the bench. Non stop motor. 18 points, 10 rebounds

Daniel Gafford: Activity around the rim makes a big difference. Also came up with 2 steals vs. New York. 7 points, 4 blocks

Deni Avdija: Second year player with a smooth feel for the game. Coming off an ankle injury. 4 points, 3 rebounds

Skylar Mays: Second year guard who plays heads up. Energy can be counted on when needed. 4 points, 2-2 FG

Desmond Bane: Efficiency has been at a high level all preseason. Gets to his spots with a smooth feel. 18 points, 4-8 3-PT

Xavier Tillman: Basketball IQ makes a difference. Also dished out 4 assists and came up with 2 steals vs. Atlanta. 6 points, 11 rebounds

John Konchar: Gets on the offensive glass extremely well for a guard. Had an impressive putback dunk last night. 6 points, 7 rebounds Day Six Of 2021 NBA Preseason: Under-The-Radar Players Who Stood Out Day Five Of 2021 NBA Preseason: Under-The-Radar Players Who Stood Out 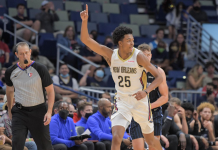 Day Four Of 2021 NBA Preseason: Under-The-Radar Players Who Stood Out Day Three Of 2021 NBA Preseason: Under-The-Radar Players Who Stood Out Day Two Of 2021 NBA Preseason: Under-The-Radar Players Who Stood Out

Day Seven Of 2021 NBA Preseason: Under-The-Radar Players Who Stood Out

Anthony Davis on Malik Monk: “We’re still surprised we got him,...

Lakers roster breakdown: Looking at all 19 players for training camp...

Mark Jackson: “Patrick Ewing didn’t realize the power he had like...