Golden State Warriors will face the Los Angeles Lakers without Andrew Wiggins, who was ruled out with left knee soreness, the team announced Friday.

During the Warriors’ comeback win against the Nuggets, Wiggins played 16 minutes, scoring four points on 1-of-4 shooting from the field. He also added three rebounds and two blocks.

Jonathan Kuminga will also miss Friday’s preseason clash against the Lakers due to a knee injury. As a result, Golden State will be thinned in the small forward position.

Lakers injury report vs the Warriors includes only one player 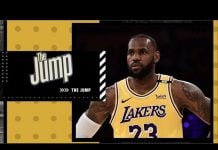 Can the Lakers build a strong defense with their roster?

How the Lakers can adapt to life without Trevor Ariza

Chris Broussard: “Miami, not the Lakers, had the best offseason by acquiring Kyle Lowry”

Kyrie Irving would retire if Nets trade him, per NBA insider

3 NBA Legends Who Love to Gamble

FC Barcelona, Zenit Saint Petersburg make it two in a...