Shai Gilgeous-Alexander has established himself as one of the up and coming players in the league, after a great, but short season during the 2021-22 campaign.

OKC sidelined SGA for the most part of the previous season, as the Canadian superstar played in just 35 games with the Thunder.

He recently signed a five-year rookie scale extension worth $172.6 million. The Thunder look ready to build around Shai Gilgeous-Alexander as the promising guard showed flashes of greatness during last season.

After suffering a “significant tear” in his plantar fascia last season, the Thunder decided to sideline him for the rest of the year, as the franchise had already been out of any playoff conversation.

As a result, he was limited to 35 games, but he was great when he was out on the floor, and that’s the reason the Thunder decided to make him a centrepiece in the franchise rebuild.

Oklahoma City had a 16-19 record with Gilgeous-Alexander active, while the Canadian superstar was showcasing new additions to his game, as he took advantage of his highest career usage rate to show his ability to be a leader.

He spent most of the time in the point guard position under new head coach Mark Daigneault. He amped up his assist production, while he increased his effectiveness in the offensive side.

His exceptional production was reflected in the advanced shooting metrics, where he averaged a 63 TS% and a 57 EFG%, both way above from the league averages, according to basketball-reference.com.

Shai had several benchmark nights during last season, despite his limited time on the floor due to injury. One of those games was against the San Antonio Spurs, where he showcased his improvement.

The OKC Thunder’s star finished the game with a career-high 42 points, adding also eight rebounds and four assists, to lead his team to a 99-102 victory over the Spurs.

SGA was constantly attacking the paint, while he made his share of three-point attempts, making six out of his 11 attempted threes, with most of them coming off the dribble.

The third-year guard had the chance to play alongside Chris Paul during his sophomore year, and CP3’s influence is evident in SGA’s game.

If Shai Gilgeous-Alexander’s foot injury is at all limiting him early in the new season, the young star could miss some games. In that case, his chances to be part of the All-Star team will be limited.

However, if the Thunder deem that he is healthy to play, the Kentucky product will be a strong candidate to become a first-time All-Star this season.

“I feel 150 percent. I’ve felt good for a long time now, and I’m super excited to play… I’m completely back, like I’m jumping, running as fast as I can with no restrictions at all,” SGA said on OKC Thunder media day.

The 23-year-old combo guard will have the entire training camp at his disposal to see how he’s feeling after recovering from his foot injury. Also, the full participation in the camp will give him the opportunity to acclimate with his new teammates.

The young guard did not hesitate to place the bar of expectation really high, before the start of the season, as he talked on his goals after signing the rookie scale extension.

Even though, the Thunder are still in a rebuilding state, Shai seems ready for an explosive year as the leader of the young OKC core. 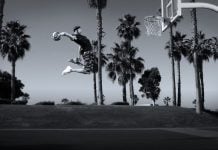 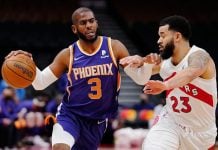 Shai Gilgeous-Alexander to miss multiple weeks due to ankle injury 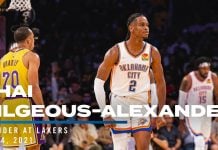 DeAndre Jordan on Shai Gilgeous-Alexander: “He’s a hell of a player”