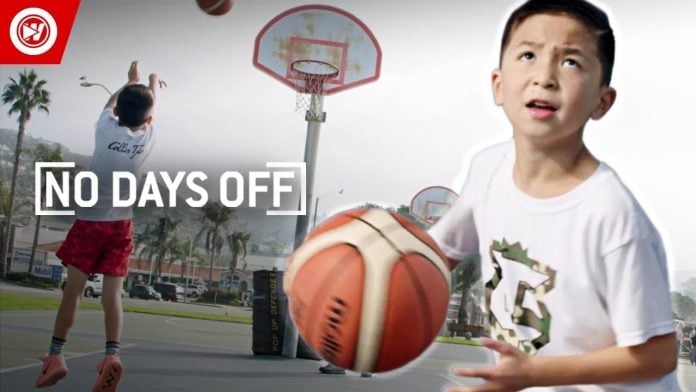 You’ve probably seen YouTube videos showing young kids and teenagers with serious talent, showing off insane basketball moves that rival the best college players and some of the pros. While some of these people end up playing basketball in college, only a few go professional.

Many of these players are so dedicated that they have full or half-courts built at home. Their parents often convert part of the yard to a court, preparing a concrete foundation and lining it with basketball flooring tiles to simulate a real court. That kind of investment is no joke.

Even though many young talented players seem like they’re going pro, the majority don’t pursue professional basketball careers. Some quit after college, but others don’t even try to play after high school. When you witness the following talented players, you have to wonder why some never make it to the pros.

Jaliyha Manuel is a 12-year-old girl with serious basketball talent. She’s been playing basketball since she was four years old, but not just for fun. Jaliyah’s dad has been coaching her ever since she expressed an interest in the sport. With a coach, she’s been practicing drills for just about her entire life.

Her dream is to play for the WNBA, but also to be the first female to play for the NBA. Unlike some of the other talent on this list, Jaliyah is young enough to have a chance to go pro.

Another child basketball prodigy, Collin Tjin has incredible moves and footwork that will make you wonder if he shouldn’t already be a pro. At just ten years old, Collin was already way ahead of his peers. However, he’s not just crushing in terms of talent; he’s also a great team player. When he plays, he could easily make all the shots himself, but he makes sure to pass the ball to his teammates to let them score, too.

Now that Collin is 12 years old and still playing, his future career as a pro basketball player looks promising. Hopefully he’ll get to live that dream and be recognized on a national scale.

At just eleven years old, Jashaun Agosto showed the world amazing dribbling skills and perfect shots – nothing but net. He was so good, he played 2-on-one and still dominated the court.

Jashaun became a 2x high school state champion, and received a full scholarship to Long Island University where he played fairly well. However, his skills weren’t on par to pursue professional basketball. The problem may have been that he focused more on fancy dribbling moves than on the game as a whole.

Although he never made it to the NBA, he still has skills on the court. Perhaps he would have made a good Globe Trotter.

Now sixteen years old and 6’4”, Ron Holland is determined to play for the NBA. At fifteen years old, he was already playing at a college level. At just eleven years old, he dropped 21 points in a championship game. It’s no wonder since he spends 6-7 hours in the gym every day practicing his shots and moves.

Ron is a fearless player who goes all-in when he plays, regardless of who he’s playing against.  It’s too early to know if he’ll follow his dream to the NBA, but out of all the young talent, he seems the most likely to make it to the NBA.

Kyree Walker was hyped up as a mega-talented high school basketball player. He was always the top player on his team and was considered a 5-star recruit. As a high school freshman, he averaged 6.5 rebounds, 4 assists, and 21.3 points per game.

Kyree disappeared off the radar for a while when he didn’t play basketball for his entire senior year in high school. However, he’s still determined to pursue a career in the NBA and has decided to skip college to make his NBA dream come true.

Having mad skills isn’t a guaranteed ticket to playing professional basketball. While skills are the foundation of a pro career, not everyone is cut out to make the immense sacrifices required to pursue the dream of playing pro.