Los Angeles Lakers forward Kostas Antetokounmpo, the younger brother of NBA superstar Giannis, is currently away from the team attending to a personal matter in Greece.

The news, first reported by ESPN, states that Antetokounmpo has not been with the team for the duration of the Lakers’ playoff run while in Greece. There’s no immediate timetable for his return.

But with the NBA playoffs in full swing, now is your chance to get involved with Unibet PA, who have many fantastic sports betting offers available.

Despite Antetokounmpo’s absence, there is definite optimism that the forward could rejoin the team during the post-season should the Lakers advance past the Phoenix Suns in what has become an first-round Western Conference playoff series, currently deadlocked at 2-2.

The three-year veteran is currently on a two-way contract with the yellow and gold, averaging 0.8 points and 1.3 rebounds in 15 spot appearances this season.

The Greek player has previously played with the Dallas Mavericks and NBA G-League side, Texas Legends.

In light of COVID-19 concerns affecting roster availability, the league is allowing two-way players to be postseason eligible this year.

While Kostas tends to matters back at home, his superstar brother Giannis is preparing for the next round of playoff basketball after the Milwaukee Bucks swept last season’s beaten finalists, the Miami Heat.

Giannis Antetokounmpo starred with 20 points, 12 rebounds and 15 assists in a first post-season triple-double as the Bucks took care of a lacklustre Heat side that were a shadow of the hungry underdogs that they were last season inside the unique NBA Bubble in Orlando.

“It’s a great moment for us, winning 4-0 and beating the team that beat us last year,” Antetokounmpo said. “But at the end of the day, we have a long way to go.”

Coach Mike Budenholzer agreed, saying: “It’s the first round of the playoffs. And I think there’s gotta be a humility, a humbleness, an attitude or a mindset to get better,” Budenholzer said.

However, the Nets answered back in game four thanks to sublime showings from Kevin Durant (42 points), Kyrie Irving (39 points, 11 rebounds) and James Harden (23 points, 18 assists).

Brooklyn Nets have been considered as favourites to become NBA champions, a title currently held by the Los Angeles Lakers. At the moment though, the Lakers have been hampered by injuries, most notably to Anthony Davis. 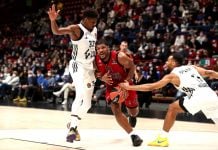 Kostas Antetokounmpo on TalkBasket: “Very proud of what my brothers have accomplished”

Giannis face-times his brother after winning the title: “I’m a f*cking Champ!”

Kostas Antetokounmpo is expected to leave the Lakers