As a result of voting that included fans, media and, for the first time, head coaches and team captains, Vasilije Micic of Final Four-bound Anadolu Efes Istanbul has been honored with a place on the 2020-21 All-EuroLeague First Team.

In the finest of his seven Turkish Airlines EuroLeague seasons to date, Micic established career highs in scoring (16.3 ppg.) and performance index rating (17.0).

The 27-year-old guard made a team-high 34 starts for Efes and ranked sixth in the league with 29:42 minutes played per game.

He also finished fourth in scoring, ninth in assists (4.8 apg.) and 10th in PIR. Micic was one of just three players in the top 10 in both scoring and assists. 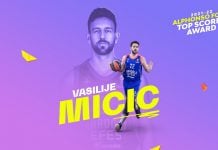