The Cleveland Cavaliers have signed veteran center Anderson Varejao to a 10-day contract, the team announced.

The team was granted a hardship exception by the NBA in order to acquire Varejao, as they have several players currently out with an injury.

Teams can apply for the hardship exception if they have four players who have missed at least three games due to illness or injury and will continue to be out at least two weeks.

Varejao, 38, spent his first 12 NBA seasons with the Cavaliers.

“Andy embodies all that the city of Cleveland stands for and beyond, and we couldn’t be more excited to bring his experience, leadership and character back into this locker room,” said general manager Koby Altman. “His infectious work ethic and commitment to our community have earned him his rightful place in the fabric of this organization and all of Northeast Ohio, and have established a genuine admiration that resonates strongly throughout our passionate fan base. There are not many athletes who can impact the game of basketball the way Andy has over his career, and I feel that our players will benefit greatly from their daily interaction with him. We are thrilled to welcome Andy and family back to the Cavaliers.”

Varejao has appeared in 627 total NBA regular season games and has averages of 7.3 points, 7.2 rebounds and 1.2 assists per game, while shooting 51.0 percent from the field.

Collin Sexton: “I love Cleveland. I want to be here” 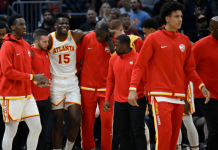