The NBA G-League’s shortened season has now reached its end, as the Finals will be held tomorrow between Lakeland & Delaware. Plenty of NBA level talent will be on the court, including names like Rayjon Tucker, Paul Reed, Isaiah Joe, Robert Franks, Devin Cannady, & Karim Mane. Both teams are playing great basketball at the right time, blowing out their opponents by a combined 39 points in the semi-finals. 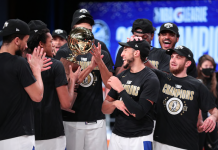