Dallas Mavericks are looking in ways to improve their roster, according to Bleacher Report’s Jake Fischer. As a result, they have John Collins in their radar, if he becomes a free agent next summer.

Collins has yet to re-sign with the Atlanta Hawks as the franchise could look to listen to offers for the young forward/center, according to reports.

Collins is a great pick’n’roll partner for Trae Young averaging 17.4 points, 7.5 rebounds, 1.5 assist and 1.0 block per contest this season.

He’s shooting 53-percent from the field and 38-percent from deep, with the Hawks improving as a team and becoming a legit playoff contender this season.

“If John Collins were to get hold of restricted free agency, expect the Mavericks to make a significant offer, according to league sources,” Fischer wrote.

It remains to be seen if the rumors are true, however it’s still pretty unclear what the Mavericks would like to do, after Mark Cuban and Rick Carlisle denied the reports about exploring trade possibilities for Kristaps Porzingis.

However, Collins could be a viable option if the Mavs have the cap room to sign him as a restricted free agent the next summer. 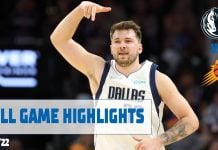 Ime Udoka on Al Horford: “He’s been a calming influence the...