The Phoenix Suns are on a roll winning five straight games, with the latest success coming against the leading team in the East, the Philadelphia 76ers.

Kendrick Perkins praised coach Monty Williams for his work with the young Suns, while he talked about the role of Chris Paul and Devin Booker establishing a winning culture in Phoenix.

Hopefully for the franchise, the long playoff-drought could come to an end this season, with Booker and Paul leading the team.

The Suns are on the fourth seed having a 16-9 record and eight wins in the last nine games, with three of them coming against the Sixers, the Bucks and the Celtics. 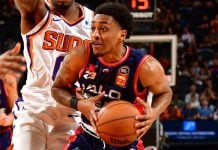